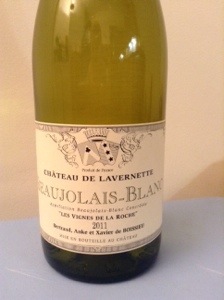 Having survived our first few days setting up Tranche 1 at IWC 2014 in London, we settled down last night to a lovely glass of Beaujolais Blanc, purchased on our recent travels in France at Chateau de Lavernette in Leynes, southern Burgundy. The chateau and estate were originally the property of the monks of the abbey of Tournus and now belong to the de Boissieu family, descendants of the Lavernette family. We visited the Chateau just days before their harvest was starting in September and enjoyed a wonderful tasting with the family. Interestingly, the chateau is at the crossroads of the Mâconnais and Beaujolais wine regions, quite literally as the border cuts their driveway in half. To read more about our visit, see our Burgundy and Beaujolais blog just published.

Their Beaujolais Blanc had lovely juicy white fruit and flower flavours, a soft and creamy mouthfeel with a nutty edge. It went down very nicely on its own as well as with our vegetable pasta dinner.

We had now reached what seemed like miles and miles upon miles of vines, it was truly beautiful! Every available space was lent to viticulture – welcome to Burgundy!

The weather was still being kind to us, with temperatures in the twenties, enabling the skies to clear later in the day opening up a wide vista of vines as far as our eyes could see. What better place to begin our day than at Gevrey Chambertin.

We had an early morning appointment at Domaine Heresztyn and did not want to be late as we knew that we were in for a treat. We were met and greeted by Ewa, who is mother to winemaker Florence Heresztyn, third generation of the family, whose husband Simon Mazzini also makes Champagne.

Ewa spent a little time explaining her family history and how the Domaine has developed over the years. You would be right in thinking this isn’t a very French Domaine name because it’s actually Polish. Jan Heresztyn emigrated from Poland in 1932, eventually arriving in Gevrey-Chambertin where he started acquiring parcels of vines, building up the business to what it is today with his two sons and now grand-daughter. It was a lovely start to the day and helped create a nice ambience in which to taste some truly excellent wines. 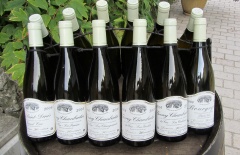 Kelvyn particularly liked the more gamey aromas of the Gevrey-Chambertin Premier Cru 2007, whose grapes came from the parcel of vines right next to the house. Ruth preferred the softer, fruitiness of the Morey-Saint-Denis 2007. It was fascinating to taste the differences between each vineyard site.

Soon we were on our way again, travelling south. So much is in close proximity to the road that name after famous name simply pass by as you drive. It was with awe that we tried to take all this in.

In order to gather our thoughts, we felt that it would be a good idea to stop off and stretch our legs at Vosne-Romanée to walk around its many famous high sloping vineyards. What an ideal place for a picnic whilst bathed in beautiful sunshine, leading to an immense feeling of satisfaction, eating local produce (though the tomatoes were from an allotment in North Shields!) and drinking a glass or two of the red stuff. A lasting memory indeed! 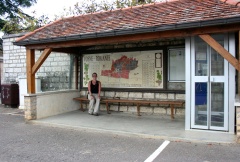 We then drove through the famous Côte d’Or villages of Nuits-St-Georges and Beaune. Stopping off at Nuits-St-Georges as well as making a detour to Meursault, Saint Aubin and Puligny-Montrachet for brief strolls to soak in the atmosphere. It was also great to see the many pickers at work in the vineyards – something that we would be doing in a few days time.

Near to Saint Aubin we passed the sign for the quaint village Gamay (though none of the grape variety of the same name is found here) and recalled a producer from there whose wines we have previously bought at the Paris Vignerons Indépendants Fair, Domaine Gilles Bouton et Fils, and are excellent. Sadly, all was quiet due to harvest so we weren’t able to visit on this occasion but we hope to return again.

On our way from North to South Burgundy, the terrain turned quite flat and agricultural concerns other than vine took precedence before regaining their status as we approached Mâcon. Here, the valley that we were driving through grew more hilly.

After a little bit of driving up and down small winding country lanes, we eventually arrived at Château de Lavernette where we were greeted by another mother of one the wine makers, Anke Boissieu. She made us feel very welcome and gave us a bit of a history lesson whilst we were waiting for her son Xavier and wife Kerrie, who share the wine making between them, to arrive.

We discovered that the Château has been in the hands of the family for some 400 years, having taken over from The Lordship of Lavernette and prior to this, the place had been owned by monks. It also lies on the border of Mâcon & Beaujolais, in fact the driveway of the Château is located in both AOC’s. Therefore, allowing the property to create both these regions’ wines.

Ta-da on the border of Burgundy and Beaujolais

We were met by Kerrie, who took us on a tour of the vineyards, first the Gamay grapes grown in the Beaujolais section and then onto the vines of Mâcon. Quite a novel experience!

Kerrie explained that the Estate is managed biodynamically, of which both her and husband Xavier are keen advocates. However, Kerrie also likes to inject a bit of a scientific approach into this as much as possible as her background was originally in medicine when she was a native of the States. It is here that she met Xavier when both were studying oenology at Saintsbury in the Napa Valley California.

We later came across Xavier in the winery where he was undertaking final checks and preparations for the forthcoming harvest, which was expected to start after the weekend of our visit.

Both he and Kerrie make the wines, though both have different approaches. For example, Kerrie has purchased some stainless steel tanks and is producing a range of wines from these, whereas Xavier prefers to use the traditional concrete tanks.

However, despite the family being steeped in tradition and Xavier’s endeavour to maintain this, he is not afraid to try out new things, for example by developing a sparkling style Blanc de Noirs ‘Granit’, with 100% Gamay, alongside a more traditional Crémant de Bourgogne and we must say that we thoroughly enjoyed both.

Kerrie showed us around the winery and cellar, where there were some interesting looking ‘saucissons’ hanging from the ceiling, of which one was enjoyed with a glass of vino later on around the table. She also showed us the equipment used for making up the biodynamic mixtures as well as examining the fertiliser that is produced from manure that had been placed in a cow’s horn, the earth was alive with worms and wee beasties.

It was great to while away a few hours tasting the wines from both winemakers and being made to feel very welcome by other family members and their friends on what was becoming quite late on a Saturday evening. We came away knowing that we would return to this delightful Château and its wonderful hosts hopefully sometime in the not so distant future.

Would things heat up as we headed South to the  Rhône? ….

What have we been doing lately?